Again we have some Tiny Thoughts on a show we saw last fall, touching upon the basic points of what I would tell a friend if they asked, "How was the show?"

So what's the deal with this show?

It was a staged concert of Verdi duets, performed at The Muse, a giant warehouse-turned-aerial-studio in south Bushwick, Brooklyn.

How was the piece? Or the stuff they chose?

The founders promised to showcase big dramatic Verdi singing, and that they did. There were scenes from Luisa Miller, Traviata, Aida, and Trovatore.

There was a clever symmetry to the presentation, with four singers on four square platforms in a square formation with the grand piano in the middle of it all. Each singer seemed to be enthroned on an island that only the music could penetrate. Lighting was stark floodlights, scorching performers and audience alike; at one moment I felt it was a boxing match I was watching, fighters trying to sing each other out of their various rings, sweat and saliva flying. Exciting!

The polished wardrobe of the singers failed to reflect the visceral surroundings, but it was a nice juxtaposition to see well-heeled opera divas drinking my local Brooklyn beer.

It was also the perfect length - under ninety minutes with no intermission, and started at 9pm so I had time to get dinner after work. Bonus!

The director John de los Santos gets props for staging a concert in a way that felt like something visceral, and spatially epic. The four singers were well matched -- baritone Joshua Jeremiah was a fun watch from the first row -- he made you believe Germont had fallen in love with Violetta at first meeting, but was still driven to hurt her. The bright, blazen color of his baritone could start a fire. The mezzo Karolina Pilou had a fascinating color as well, like dark granite in the low range. The tenor Dominick Rodriguez was solidly heroic, just hit everything right. Soprano Suzanne Vinnick was lively and used formidable chest resonance and dynamics, though her performance was muddied by an unwavering outpouring of emotion. 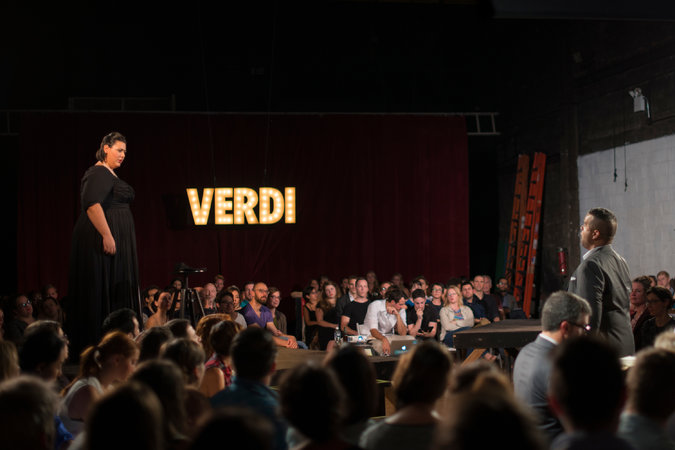 We walked in and didn't know anyone -- what a great surprise to see fresh faces at an opera event! Especially when we had to walk down a few deserted, dark streets to get there. I finally bumped into one old-school opera colleague and he said,

"No, I've never been to this area of Brooklyn...it reminds me of Soho in the 80s, but without the buckets of cocaine."

Instead, there were Brooklyn brews a flowing, and there was a magically naughty moment when Jeremiah went to get another beer from the bar during the Brindisi finale. Yes, a bar should indeed be open during the show, AND be five feet from the stage.

I only wish there had been an aerial show as well.

Absolutely, what a great date night. The Muse might be hard to get to, but the nearby Nowadays bar made the evening complete. Many audience members were also sporting their light blue wrist bands, showing we'd all been for a drink, or three, before the show.
Posted by Unknown at 11:07 AM