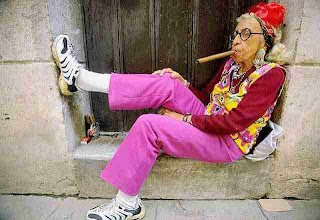 On Monday I took advantage of the ecstatic September weather and caught operamission's Figaro performance, which was presented as part of the Bryant Park Fall Festival.

It was idyllic: sparkling sun, cool breezes, amazing food and beverages, and bustling energy surrounding a park with Mozart flowing through the speakers.  As I walked from the south side of the park to the north, tables of lunchers gave way to sunbathers, which gave way to rows of seats in front of the white-tented stage.

At the end of the performance, around two o'clock, I was surprised by the woman near me, who leapt to her feet, clapping, shouting,

She admonished her friends, some of whom had fallen to napping in the sunshine: "You missed the best part!  There was a ton of action!  They were really goin' attit!!! (referring to the Figaro Act II Finale Throw Down)

Why aren't more people standing??  That was AWESOME!

I spoke to her afterwards.  I was too shy to ask for a picture, but she looked something like the picture above, except very excited. Her name is Sue and she's from Brooklyn.  She'd seen opera before, but had never subscribed to anything. She liked Mozart, Handel; Beethoven not so much. She was also excited because, at that same moment, her daughter was expecting to give birth to a baby girl by way of c-section.  She gave me a hug and said God Bless.

So I was surprised by her not by her age, but her energy.  She stood up and hollered. She knew she was seeing something special.  And she had a busy life, with babies being born any second -- she had a lot on her mind.

So how we get her into the Hall to hear singers on a regular basis?  I don't know.

But that would be AWESOME.