What's the deal with this show?
A young company in town, Heartbeat Opera, presented an ambitious double-bill for their festival's opening night: a ninety-minute adaptation of Lucia di Lammermoor with the complete Dido & Aeneas, both with small orchestral ensemble.

How was the piece?
Of course Lucia and Dido are both celebrated classics of the repertoire - however, their stunning music and timeless themes are countered by imperfect plot progression that hamstrings the drama, and it all just goes on for too damn long. The directors here managed some brave adaptations: Lucia was cut in half, and Dido had many of the interludes cut or rearranged and roles merged.

How was it executed?
Lucia's centerpiece was the title character's own mental and physical isolation - the production was bookended with the stark image of a single patient strapped to a metal hospital bed.


For someone who has seen Lucia before but doesn't know it intimately, the story unfolded swiftly with a focus fixed on how powerless Lucia is to determine her own fate. There were costume choices that hinted at an Italian mafioso or urban gang context, which framed Lucia as even more of a sacrificial lamb, a woman whose worth lies only in whom she marries.

Dido was presented as a five-singer ensemble, with ladies in waiting also serving as witches, and often the entire ensemble singing the many choral interjections. Similar to Lucia, this ensemble energy helped focus the action on manipulating the title character into her own demise. It's hard work, bringing down the kingdom of Carthage - you need some bad-ass characters to do it, and this production delivered. It was also the funniest and sexiest Dido I've seen. (Note: Dido is usually neither funny, nor sexy.)


But what made this evening remarkable wasn't just the smart adaptations, it was how both productions used a collaborative instrumental ensemble and a facile use of space and texture to create a sparkling, unexpected theatrical experience.

I could list so many moments in both Lucia and Dido that made you go "whaaaa?": characters digging into a stage which is also earth - a percussionist following the soprano's every cadenza - an ace bandage that becomes a love bond and also a wedding corset - an old bathtub that becomes a witch's brew and a poisonous pond - instrumentalists who suddenly stand, enter or exit and become part of the set, part of the action - an electric guitar, a toy piano or a dissonant chaos adding unexpected sound and texture - indeed, there were surprises.

Theatre nerds call these surprises "revelations," as in revelation of space, of thing, of character. It's when something becomes something the audience didn't think possible. A tiny "wow." This is something opera often lacks. How cool to see an opera company also make great theatre.

Who were the stars?
Props go to Jamilyn Manning-White, who carried the title role of Lucia with her firecracker energy, palpable fragility, and focused soprano.


John Taylor Ward stood out for his slimy and sinuous portrayal of the chaplain Raimondo in Lucia. He then turned around and played a quite convincing Aeneas (a difficult antagonist role that gets few scenes but makes everything happen) with his white silk shirt and arrogant air. He then also managed to support the witch scenes as a hooded, quadrupedal figure.

I don't know many baritones who will successfully sing a role like Aeneas, nail a comprimario role like Raimondo, and then get down on their knees and play an unnamed witch-dog. Cheers to to the "Heartbeats" for finding one.


Cheers are also due to Christopher Preston Thompson, who played the Sorceress with an edgy trans punch - stepping into a bathtub in platform heels and fishnet tights, fearlessly playing his tenor and countertenor instruments, radiating the vocal and emotional counterpoint to Carla Joblonski's imperial Dido. (Full-disclosure: Christopher is a good friend of ours, and was excited to make his fishnet-tight debut.)


And enough cannot be said about the fantastic arrangements of both ensembles, led by Daniel Schlosberg and Jacob Ashworth; the way solo singers became connected to the instruments, instrumentalists seemed affected by the music and story - it felt like a competitive sporting event that had never happened before. This is a quite a feat with music that is hundreds of years old.


What was the venue experience like?
I thought I'd been to every church-come-theatre on West 46th Street, but I was wrong. This one was Theatre St. Clement's, and their space is a cavernous black box that feels almost grand. The red velvet stairs through the building add some charm, and the lower floor had a reception room that served as a space for the gala reception. 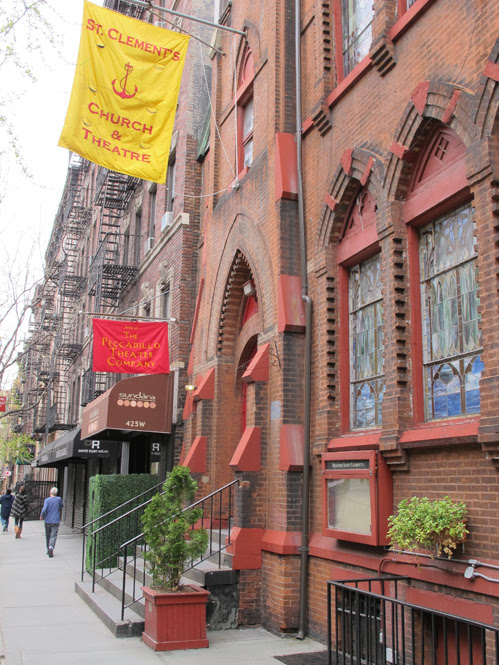 Hearing Co-Artistic directors Louisa Proske and Ethan Heard speak at the reception was really illuminating. They have a giddy excitement and genuine friendliness around their art and their company that is wonderfully refreshing, especially in an industry that still depends too much on elitism, intellectual garbage and exclusivity.

A name like Heartbeat Opera might seem a bit corny until these artists convince you they are, in fact, bringing it to you from the heart.


All in all, was the outing worth paying a babysitter?
If you're an opera fan, I think I chose the best night to experience it for several hours. It was genius that the gala happened between the two shows rather than after, so at least we could drink in between and then skedaddle afterwards. All in all it was a compelling night for opera in our new century, and we're looking forward to Heartbeat's next main event.
Posted by OPERA THINK TANK at 11:17 AM No comments: