What's the deal with this show?

The New York premiere of an opera composed by David T. Little with a libretto by Royce Vavrek, about a family trying to survive in their suburban house after an apocalyptic war has left them isolated and hungry.

Presented by the PROTOTYPE Festival at NYU's Skirball Center.

How was the piece?

The piece is pretty fantastic. It's riveting vocal writing that has all the jagged edges of modernity while still landing in a rich, belly-warming way. Mr. Little weaves electronic "found sounds" into a relatively traditional nine-piece ensemble. It's important to note that unlike many new operas where the instrumentalists have had little time with the score, in this case the ensemble, called Newspeak, was one Mr. Little created himself and has performed with for years.

Rather than a typical narrative cycle, this piece grows in tension until the very horrifying, inevitable end. It may take thirty minutes too long to get there, but the end result is so harrowing and thrilling, we forgave the extra half hour. And Vavrek deserves credit for extrapolating a great deal from the short story by Judy Budnitz.

With a minimal unit set and projections, the production by Robert Woodruff showcased the performances, which were overall extraordinary. The projections provided aerial shots of the family scampering for ration drops, rendering them animals hunted, or perhaps missile targets. However, despite both the instrumentalists and singers being amplified and well-balanced, my friends and I had a hard time understanding a lot of the words, and wondered why there weren't supertitles on the giant projection screen.

One reason for the difficulty in comprehension was that some cast members sang in a vernacular diction, whereas some used the more traditional Mid-Atlantic pronunciation and as a result were not understood consistently. I often wonder when the opera world will fully make this switch into modern American singing.

In the short story, the "dog" of the title is literally a man in a Halloween dog suit, while the dog of the opera was more disturbing. Played by artist and choreographer John Kelly, the dog resembled a sinewy, homeless hippie, covered in patches of fur and dirt and duct tape, panting and pawing through an unfeeling wasteland.

With any new work, the stars are the creators, Mr. Little and Mr. Vavrek. Beyond that, the piece seemed to be a vehicle driven and dominated by soprano Lauren Worsham as the preteen Lisa. It came as no surprise to learn that the original story was told from her character's perspective.

Ms. Worsham's aria to the mirror, in which the projection screen becomes a giant fluorescent reflection of her desperate face, is worth the time of the entire evening. Lisa fights through the searing pain of her isolation by searching for lost friends in the reflection, and adoring her own, skinny, hallowed image, telling herself how beautiful she is, how she finally looks like a model. Heartbreaking to say the least.

It was one of those moments where you forget you're watching an opera, the lines just seem to pour from a human's soul. In the final scene, she copes with a sudden loss with such determination despite her frailty - Ms. Worsham held us silently in the palm of her starving hands.

In an understated performance as Lisa's mother, silken soprano Marnie Breckenridge heroically portrayed the spiritual heart of this dying world. 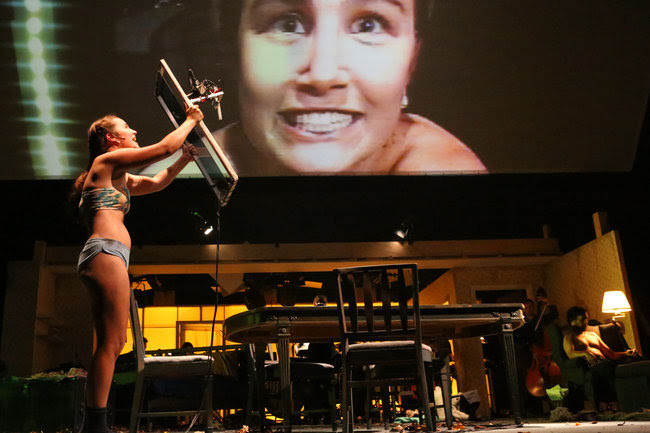 I was surprised to find online that the Skirball Center seats nearly 900 - we were in parterre seats off the orchestra and it seemed much cozier. At the Saturday night performance of this much-buzzed about production, it was a celebrity parade of opera people.

So which would be better - having no intermissions so we can focus on the art and not who we feel compelled to say hello to - or having a bigger bar to allow for the networking and socializing sessions before and after the show? As it was, the management started flickering lights at us to get us out of the lobby afterwards. Felt a little sad after such a thrilling theatre event.


All in all, was the outing worth paying a babysitter?

I think seeing Lauren Worsham do anything is worth paying a babysitter, but this piece is particularly significant for its deft use of a minimal, visible chamber ensemble, use of amplification and video art, a fiercely timely subject matter, tour-de-force performances, and an evocative, satisfying soundscape - all elements new opera needs today.
Posted by Unknown at 12:17 PM